Love one another with brotherly affection. Out do one another in showing honor. — Romans 12:10 Ten Croydon Brothers went to Liverpool for the Catenian National Conference on the weekend of 9-11 May together with nine wives and three widows, and a good time was had by all.

Liverpool has some of the best examples of neo-classical architecture in the world around William Brown Street, most notably the magnificent St George’s Hall which was the venue for the conference. You could be forgiven for thinking you were in Greece! The welcome reception on Friday evening was held in the 20th century Liverpool Anglican Cathedral, Britain’s biggest Cathedral. It was completed in 1978 having taken 74 years to build and is breathtaking in scale. You could take a coach back to your hotel, but make sure you get the right one – Sue and Mary P. didn’t and had a tour to Albert Dock before the kind coach driver took them to their hotel. Stephen and Pat had walked back and we’d been in the bar of the hotel for at least 30 minutes before Sue and Mary arrived. Saturday morning was the conference for the men, while the ladies did their own thing. Five ladies took a tour to two of the Beatle houses which they really enjoyed. In the afternoon Lina and Andrew listened to live music in the hot and sweaty Cavern Club. Tina and Ken had been the previous afternoon when it started raining, being directed down three flights of stairs (with other people) to two locked doors at the bottom! Banging one door encouraged someone to open it and let us in – it was the fire escape.

There were three “Black tie” dinners on Saturday evening, one in the Marriot hotel hosted by Grand President Bob Butler, and two with live music in the Adelphi hotel hosted by immediate past GP John Rayer and Grand Vice President Peter Woodford. We all went to the Adelphi but of those staying at the Holiday Inn only Rosemary, Peggy and Tina caught the coach: the rest of us missed it having arranged to meet in the hotel foyer at 6:20pm for a 6:30pm coach which was actually leaving at 6:15pm! Jean was adamant (and no doubt still is) that the coach was due to leave at 6:30. Five ladies therefore got a taxi while the four men walked the 4 minutes to the Adelphi, arriving just before the ladies’ taxi. 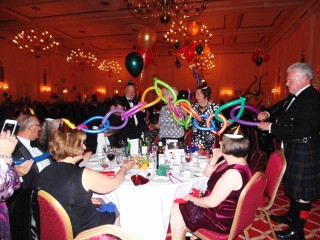 At the dinner the Croydon party ravers on table 12 lost out on the champagne prize for the best balloon arrangement because the judge was not a plane spotter and didn’t see their arrangement which they had floated to the ceiling. The prize went instead to a group of ladies who were dancing with their arrangement at head height. On the stroke of midnight the party ended, and some retired to their hotel bar for a nightcap.

Sunday morning we attended High Mass at the Catholic Metropolitan Cathedral, a modern, spacious, circular Cathedral opened in 1967, which features lovely multi-coloured windows and outside looks like a wigwam on top. Mass was celebrated by the new Archbishop of Liverpool, his first Mass at the cathedral.

A lovely weekend in lovely company and a good time was had by all, though no one took a “ferry cross the Mersey” because the wind was too strong.

This entry is filed under Events, General.

Two are better than one; because they have a good reward for their labour. For if they fall, the one will lift up his fellow: but woe to him that is alone when he falleth; for he hath not another to help him up. — Ecclesiastes 4: 9-10