Archive for the Events Category

Brothers and Circle ladies gathered Friday evening for drinks and dinner together.

Activities the following day included a boat trip along the scenic Jurassic coast, trips to Isle of Portland, the lighthouse at Portland Bill, Chesil Beach and the D.Day museum.

Dinner in the hotel Saturday evening was followed on Sunday morning with the brothers and their wives joining the local congregation for mass.

Brothers and Circle ladies at the Marina at Weymouth

The Province 19 cricket match took place at The John Fisher School on July 28th after mass in the school chapel.

Richard Mills of Croydon Circle is Provincial Vice President this year and his team made up largely of Croydon brothers came away as victors against a team fielded by Provincial President, Dominic O’Shea.

In a nail biting climax, the winning runs were scored from the penultimate ball of the match.

Richard thanked all the Croydon brothers who made it possible and to the brothers and their wives who gave their support.

Bournemouth was the chosen venue for this year’s President’s Weekend and 46 Brothers, Wives and Ladies were booked into the Connaught Hotel – conveniently located just up from the West side of town.

Friday night got things off to a lively start with a visit to the Pavilion Theatre to enjoy a performance of Pop Classics from the 50s, 60s and 70s given by “That’ll Be The Day” – the popular touring group. Word had leaked out that Croydon Circle was in the house and we were given a light hearted greeting from the stage.

Saturday was spent “at leisure”. The list of things to do in and around Bournemouth is a long one. One group decided on the open top bus tour of Bournemouth, Sandbanks and Poole. Some hopped off in Poole to have lunch, explore and enjoy a boat trip.

On Saturday evening we gathered for our traditional Gala Dinner in the Hotel, preceded by the President’s Drinks Reception. An excellent meal was enjoyed and followed by dancing to music provided by “Stepping Out” until midnight.

The weekend was wrapped up on Sunday morning with Mass at the Sacred Heart Church (Bournemouth Oratory in Formation) in the centre of Bournemouth where we were warmly welcomed by Fr Peter Edwards. 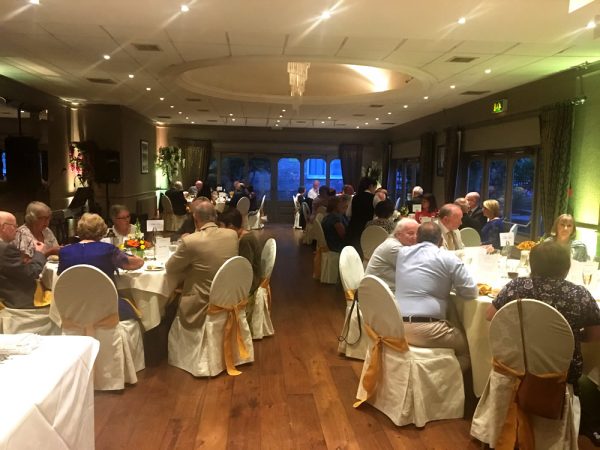 Croydon Circle’s Annual Clergy Night Supper was held on 16th November 2017 at Purley Downs Golf Club. The Circle  welcomed twenty guests from the local Clergy, Deaconate and religious life together with our Circle Widows and wives. Most of the local Parishes were represented together with several retired Priests, well known to the brothers and wives.

Bro President Steve Tatler thanked our guests for their commitment of their vocations and contribution to  Catholic faith and education.  Fr Roy Tablizo the newly appointed Parish Priest for St Columba Selsdon responded on behalf of our guests and visitors.

Fifty two Brothers, Wives and Circle Ladies attended the weekend, based at the Mercure White Hart Hotel, conveniently situated in the centre of Salisbury.

The weekend got underway with Evensong at Salisbury Cathedral where Croydon Circle were warmly welcomed by Canon Robert Titley, who was no stranger to the Catenian Association, having previously attended a Clergy Night organised by Richmond & Twickenham Circle.

This was followed by a champagne reception and dinner at St Elizabeth’s Hall just a short walk from the Hotel. There was a great ‘buzz’ around the room as the latest news about families and friends was shared and anecdotes exchanged.

Saturday morning was filled with a Guided Tour of Salisbury which started at the hotel and finished in Cathedral Close. The guides were Blue Badge professionals who recounted the history of Salisbury as we passed the old houses of wool merchants, the Guildhall and old inns as we moved to the Market Square with its Saturday Morning market.

With so much history, there was an enormous amount to see and enjoy. The tour ended at the Cathedral which was finished in 1258 and houses a copy of the Magna Carta in the Chapter House. Thankfully, its tiny print in old Latin was accompanied by a translation in modern English.

Saturday evening started with a private dinner in the hotel restaurant and finished many hours later with non-stop dancing to the music of Steve and Roy Easthope aka ‘First Choice’. The guests included the President of Salisbury Circle Bro. Andrew Verrian and his wife Alison accompanied by three Salisbury Brothers and their Wives.

Steve Tatler (far) and Roy Easthope (near) aka ‘First Choice’

On a sunny June day over 20 of our Circle ladies gathered in Gill Tomei’s garden for Afternoon Tea.

A welcoming glass of cold Prosecco was followed by a selection of delicious sandwiches, cakes and of course, the obligatory scones with cream and jam.

The sound of chilled acoustic music from Oli Tatler, son of Lady President Lorraine, provided the ideal backdrop to a perfect afternoon.

Proceeds from this and other events enabled the Ladies to donate £500 to the Red Cross Grenfell Tower Fund. A wonderful result!